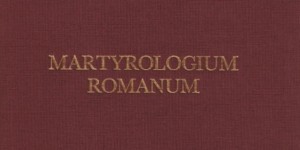 The Twenty-Third Day of November

The birthday of Pope St. Clement, who held the sovereign pontificate the third after the blessed apostle Peter.  In the persecution of Trajan, he was banished to Chersonesus, where, being thrown into the sea with an anchor tied to his neck, he was crowned with martyrdom.  During the pontificate of Pope Adrian II, his body was translated to Rome by the brothers Saints Cyril and Methodius, and buried with honour in the church that had already been built  and named for him. At Rome, St. Felicitas, mother of seven martyred sons.  After them she was beheaded for Christ by order of Emperor Marcus Antoninus. At Cyzicum, in the Hellespont, St. Sisinius, martyr, who after many torments was put to the sword in the persecution of Diocletian. At Merida in Spain, St. Lucretia, virgin and martyr, whose martyrdom was fulfilled in the same persecution, under the governor Dacian. At Iconium in Lycaonia, the holy bishop Amphilochius, who was the companion of St. Basil and St. Gregory Nazianzen in the desert, and their colleague in the episcopate.  After enduring many trials for the Catholic faith, he rested in peace, renowned for holiness and learning. At Girgenti, the death of St. Gregory, bishop. In the town of Hasbein in Belgium, St. Trudo, priest and confessor.  Both the monastery which he had erected on his land, and the town which soon afterwards arose, were later named for him.

And elsewhere in divers places, many other holy martyrs, confessors, and holy virgins.
R. Thanks be to God. 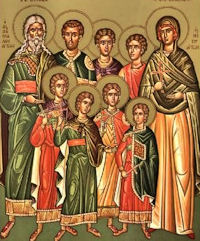 Felicitas of Rome (c. 101–165) is a saint numbered among the Christian martyrs. Apart from her name, the only thing known for certain about this martyr is that she was buried in the Cemetery of Maximus, on the Via Salaria on a 23 November. However, a legend presents her as the mother of the seven martyrs whose feast is celebrated on 10 July. And the Eastern Orthodox Church celebrates their martyrdom on 25 January, Old Calendar (i.e., 7 February, New Calendar).

The legend of Saint Symphorosa is very similar and their acts may have been confused. They may even be the same person. This Felicitas is not the same as the North African Felicitas who was martyred with Perpetua.

The feast of Saint Felicitas of Rome is first mentioned in the “Martyrologium Hieronymianum” as celebrated on 25 January. From a very early date her feast as a martyr was solemnly celebrated in the Roman Church on that date, as shown by the fact that on that day Saint Gregory the Great delivered a homily in the Basilica that rose above her tomb. Her body then rested in the catacomb of Maximus on the Via Salaria; in that cemetery all Roman itineraries, or guides to the burial-places of martyrs, locate her burial-place, specifying that her tomb was in a church above this catacomb. The crypt where St Felicitas was laid to rest was later enlarged into a subterranean chapel, and was rediscovered in 1885. In the early Middle Ages there was a chapel in honour of St Felicitas in an ancient Roman edifice near the ruins of the Baths of Titus. Some of her relics are in the Capuchin church at Montefiascone, Tuscany. Others are in the church of Santa Susanna in Rome.

Saint Felicitas (also known as Felicity) is said to have been a rich and pious Christian widow who had seven sons. She devoted herself to charitable work and converted many to the Christian faith by her example. This aroused the wrath of pagan priests who lodged a complaint against her with Emperor Marcus Aurelius. These priests asserted the fire of the gods and demanded sacrifice from Felicitas and her children. The Emperor acquiesced to their demand and Felicitas was brought before Publius, the Prefect of Rome. Taking Felicitas aside, he used various pleas and threats in an unsuccessful attempt to get her to worship the pagan gods. He was equally unsuccessful with her seven sons who followed their mother’s example.

Before the Prefect Publius they adhered firmly to their religion, and were delivered over to four judges, who condemned them to various modes of death. The division of the martyrs among four judges corresponds to the four places of their burial. She implored God only that she not to be killed before her sons, so that she might be able to encourage them during their torture and death in order that they would not deny Christ. According to God’s Providence, it so happened. With joy, this wonderful mother accompanied her sons one by one until she had witnessed the death of all seven sons. We are not entirely sure as to how each of them died, but it is said that Januarius, the eldest, was scourged to death; Felix and Philip were beaten with clubs until they expired; Silvanus was thrown headlong down a precipice; and the three youngest, Alexander, Vitalis and Martialis were beheaded. After each execution she was given the chance to denounce her faith. She refused to act against her conscience and so she too suffered martyrdom.

They suffered and entered into eternal rest in Rome about the year 164 She was buried in the catacomb of Maximus on the Via Salaria, beside St Silvanus. It is said that she died eight times; once with each of her sons, and finally her own, and their feast day is held on January 25.