The Cassock… another archival entry during the run up to the feast of St John Vianney (August 9th). Written in 2009, much still pertains though since my consecration (2013) I generally wear my cassock even more! 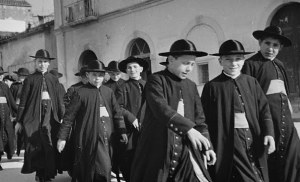 Another old post from “The Parish Blog” archive [March 27th 2009]. Anyone in Brighton would probably recognise me from this picture… not because I am in the picture, but because they will recognise the clerical dress that I most usually wear!
“Seminarians in Barcelona circa 1900 in Cassock, Greca & Saturno”

On March 16 this year whilst declaring a “year of the priest” that will begin on June 19 in a bid to encourage “spiritual perfection” among clerics, HH Pope Benedict XVI stressed that priests should be “present, identifiable and recognisable for their faith, their personal virtues and their attire”. It has become something of a yard-stick in recent years between some clerics (and their acolytes) to measure the “traditionalism” or even “orthodoxy” of Priests by what they wear… Certainly in Anglican circles to be identified as “Anglo-Catholic” there is a certain expectancy that one would majoritively wear…