Sacrifice… St Lawrence, whom we celebrate this week with an Octave, gives us another insight ref the incarnational aspect of the priesthood and indeed of the Apostolic sharing of the “bitter cup”.

St Ambrose of Milan says that Lawrence met His Holiness Sixtus II on his way to his execution. “Where are you going, my dear father, without your son? Where are you hurrying off to, holy priest, without your deacon? Before you never mounted the altar of sacrifice without your servant, and now you wish to do it without me?” Of course, Pope Sixtus was not on his way to offer Mass, Lawrence was referring to his execution… Lawrence was expressing the sharing by Sixtus in that “bitter cup” the “cup of salvation”, the “cup of trembling” and the “cup of wrath” [as discussed previously here], the Pope was about to “taste death” literally sharing in the sacrifice of Christ, for Christ by his martyrdom. Depicted in Fra Angelico’s painting is the presentation at Lawrence’s subdiaconal ordination of Pope Sixtus presenting “the cup”, a chalice and paten, signifying the invitation to share through major Orders, the Apostolic ministry and thereby the mystery of Christ’s high priesthood upon the Cross.

So now finally(!) we come to something of a conclusion ref our recent reflections. We’ve discussed something of the nature and character of the priesthood – the first obligation of the priest to be a Christian at prayer, walking daily with God pursuing personal holiness and sanctification, interceding through prayer on behalf of God’s people, most especially the Church through the recitation of the Divine Office. We’ve reflected on the true nature of humanity in the created order, that we are “body, soul and spirit” and that God works through His creation salvifically and that human beings have the potential to “spiritualise the material and materialise the spiritual”, hence the establishment by God and Christ of a ministerial priesthood. Now we come to the purpose of the New Testament ministerial priesthood; the realisation of the fruit of Christ’s redemption, the Eucharist.

It is sometimes suggested that “there is no need for a priesthood” echoing some erroneously believe the sentiments of the author of Hebrews concerning the efficacy of the high priesthood of Christ, “For such a High Priest was fitting for us, who is holy, harmless, undefiled, separate from sinners, and has become higher than the heavens; who does not need daily, as those high priests, to offer up sacrifices, first for His own sins and then for the people’s, for this He did once for all when He offered up Himself.” [Heb 7:26-27] For whilst indeed, the sacrifice of Christ upon the Cross of Calvary does indeed negate the need for regular expiatory sacrifices common under the Old Covenant, even so the ministerial priesthood of the New Covenant exists for another purpose.

The ministerial priesthood of the New Covenant exists to confect and present to us the means by which we receive eternal life. Primarily, it exists to share in and offer the Eucharist, the holy sacrifice of the Mass, by participating in the high priesthood of Christ and making manifest the “flesh and blood of the Son of Man”. [John 6:53-54] “He who hears you, hears me” [Luke 10:16] Our Lord said to the Apostles, the new ministerial priesthood. For Christ makes plain that it is only in the reception of the Eucharist that the promise of eternal life and the redemption of humanity is realised, “Truly, truly, I say to you… He who eats My flesh and drinks My blood has eternal life, and I will raise him up on the last day.” By instituting the Apostolic ministry, Christ established the means by which His body and blood would be made available to the faithful. He who became one of us to save us, continues to present Himself in bread and wine through those chosen [John 6:70; John 15:16; John 13:18], consecrated [Acts 1:15-26; Acts 6:6; Acts 13:3] and set apart [Romans 15:16; 2 Corinthians 2:17; 2 Cor. 5:20] to cooperate with Him in fulfilling the promises He made when He walked among us. 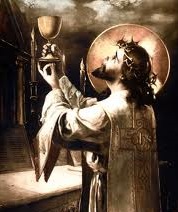 So it is that we understand the ministerial priesthood of the New Covenant to be the physical, material means by which the high priesthood of Christ is effected as in like fashion, it is in the consecrated species of bread and wine that we receive His Body and Blood and thus the fruit of our redemption, the Eucharist. As St John Chrysostom wrote, “We priests are simply the instruments and ministers of the veritable sacrifice. The Lord Himself is He who sanctifies the material gifts offered for the sacrifice, and who makes them a source of sanctification for us.” “When, therefore,” he adds, “you see the sacred minister lifting up to heaven the holy offering, think not that he whom you behold is the real priest; but rising above visible objects, consider the hand of Jesus Christ stretched out invisibly. Through Him everything is done.” [Hom. 60 ad Pop. Antioch] Similarly and more plainly here St John Chrysostom explains the relationship of the contemporary priest and that sharing in the Apostles’ ministry discussed before, “I wish to add something that is plainly awe-inspiring, but do not be astonished or upset. This Sacrifice, no matter who offers it, be it Peter or Paul, is always the same as that which Christ gave His disciples and which priests now offer: The offering of today is in no way inferior to that which Christ offered, because it is not men who sanctify the offering of today; it is the same Christ who sanctified His own. For just as the words which God spoke are the very same as those which the priest now speaks, so too the oblation is the very same.” [“Homilies on the Second Epistle to Timothy,” 2,4, c. 397 A.D.]

So then, the ministerial priesthood exists to make manifest the high priesthood of Christ. “The priest who imitates that which Christ did, truly takes the place of Christ, and offers there in the Church a true and perfect sacrifice to God the Father.” [St. Cyprian wrote to the Ephesians circa 258 A.D.] The earthly and mortal priest becomes the means by which Christ Himself offers Himself as food for the faithful. It is Christ Himself who stands before the Altar, who offers Himself in the person of the priest to God, His father as the perfect victim for the propitiation of sin; Who breathes eternal life into the species of bread and wine at the words of consecration, transforming them “This is MY Body”, “This is MY Blood”; that same “logos”, that same “ruach” that breathed life into creation [Gen 1:2; John 1:1], that breathed life into man [Isa 42:5; Ezek 37:5 Job 33:4].

Thus, as St Ambrose says, “Jesus Christ is your inheritance, O ye ministers of the Lord. Jesus Christ is your sole domain. His Name is your wealth. His Name your income. His Name constitutes your stipend, a stipend not of money but of grace. Your heritage is not dried up by heat, nor devastated by storms. The sun shall not burn thee by day, neither the moon by night. Keep then the portion which you have chosen, for it is the good portion, which the possessions of the world cannot equal.”